Skip to content
What You'll Learn?
1 INTRODUCTION:
2 Major Differences Between Bacteria and Fungi
Spread the Differences

Each of us shares our air, food, water, and shelter with tiny colonies of microorganisms that include bacteria, and fungi.

Bacteria are bigger and more complex than viruses, though they can still spread through the air. A bacterium is a single cell, and it can live and reproduce almost anywhere on its own: in soil, in water, and our bodies.

Fungi are more complicated organisms than viruses and bacteria—they are “eukaryotes,” which means they have cells. Of the three pathogens, fungi are most similar to animals in their structure.

Bacteria are microscopic organisms that are not visible to the naked eye. Bacteria are everywhere, both inside and outside of our bodies. Bacteria can live in any variety of environments, from hot water to ice. Some bacteria are good for you, while others are not.

Bacteria are single-celled and simple, organisms. Though small, bacteria are powerful and complex, and they can survive in extreme conditions. Bacteria have a tough protective coating that boosts their resistance to white blood cells in the body.

Some bacteria have a tail, called a flagellum. The flagellum helps a bacterium to move around. Other bacteria have sticky hair-like appendages that help bacteria stick to one other, hard surfaces, and human body cells.

There are many bacteria in the human body, especially in the stomach and mouth. Bacteria are found on surfaces and in substances such as water, soil, and food.

Fungi are a group of living organisms that are classified in their own kingdom. This means they are not animals, plants, or bacteria. Unlike bacteria, which have simple prokaryotic cells, fungi have complex eukaryotic cells like animals and plants. Fungi are found throughout the Earth including on land, in the water, in the air, and even in plants and animals. They vary widely in size from microscopically small to the largest organisms on Earth at several square miles large. There are more than 100,000 different identified species of fungi. 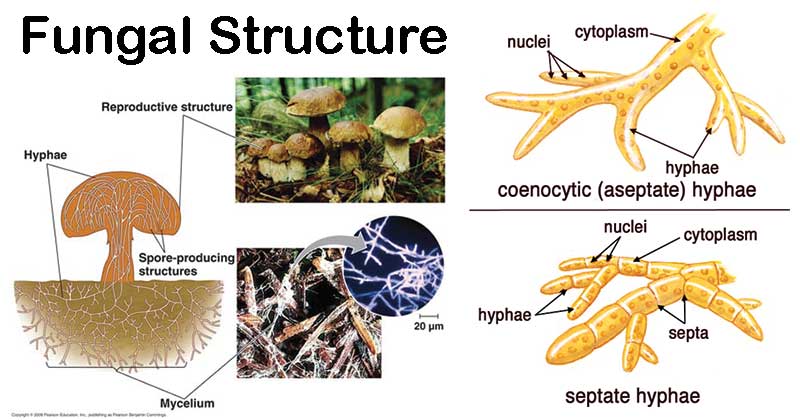 Major Differences Between Bacteria and Fungi

We can easily conclude that both Bacteria and fungi are present in the environment and are harmful to humans. A bacterium is a single cell, and it can live and reproduce almost anywhere on its own: in soil, in water, and our bodies. andFungi are more complicated organisms than viruses and bacteria—they are “eukaryotes,” which means they have cells. we can see many examples of Bacteria and Fungi