The terms PCT and DCT means Proximal Convoluted Tubule (PCT) and the Distal Convoluted Tubule (DCT) have many differences between them. Before knowing about PCT and DCT, we have to no about nephron. Nephron is the structural and functional unit of kidney. it has two main parts called Malpighian body and renal tubule. The renal tubule consists of three parts, they are as follows

⦿ Loop of Henle (U shaped)

LOOP OF HENLE (U shaped)

The middle U-shaped portion of the renal tubule present between the Proximal and Distal Convoluted Tubules is called as Loop of Henle. The Loop of Henle lies in the Medulla of the kidney. 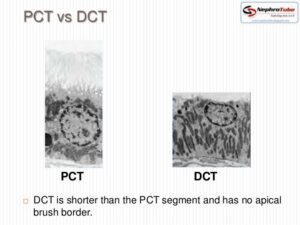 Difference between PCT and DCT:

The PCT and DCT and the Loop of Henle are the main parts of the renal tubule which is the part of the nephron. Nephrons are located in the inner medullary zone of internal kidney. Each kidney is made up of approximately more than 1 million nephrons.

For further reading about difference between DNA and RNA click here.