In general, Plants that we observe around us are usually multicellular. They perform several life processes such as growth, respiration, excretion, etc; similar to those performed by animals. Some types of tissues are present in the plant in that there are different types of plant tissue that help in different functions of the plant body.

In addition to these, they can perform photosynthesis and prepare food not only for themselves but also for all other living organisms dependent on them, either directly or indirectly.

Cells in groups that are nearly similar in structure perform similar functions. Such groups of cells are called tissues.

Let us have a small conversation:

One day Ruchitha went to the park with Samhita. There she saw a gardener cutting the tips of the plants with a cutter. She had a doubt and asked the gardener to clear it.

“How do the plants grow if the tips have been cut off?”

He said, “ branches will grow from the sides”.

Later she saw another gardener, watering a stump. She went there and asked.

“Why are you watering the stump?”

“The stump will soon bear leaves,” he said

Ruchitha had a question in her mind, “how will the leaves come?” Do you know the answer?

Now we will know about types of plant tissues that bring growth, repair, and other functions in a plant body.

There are four basic types of plant tissue. They are 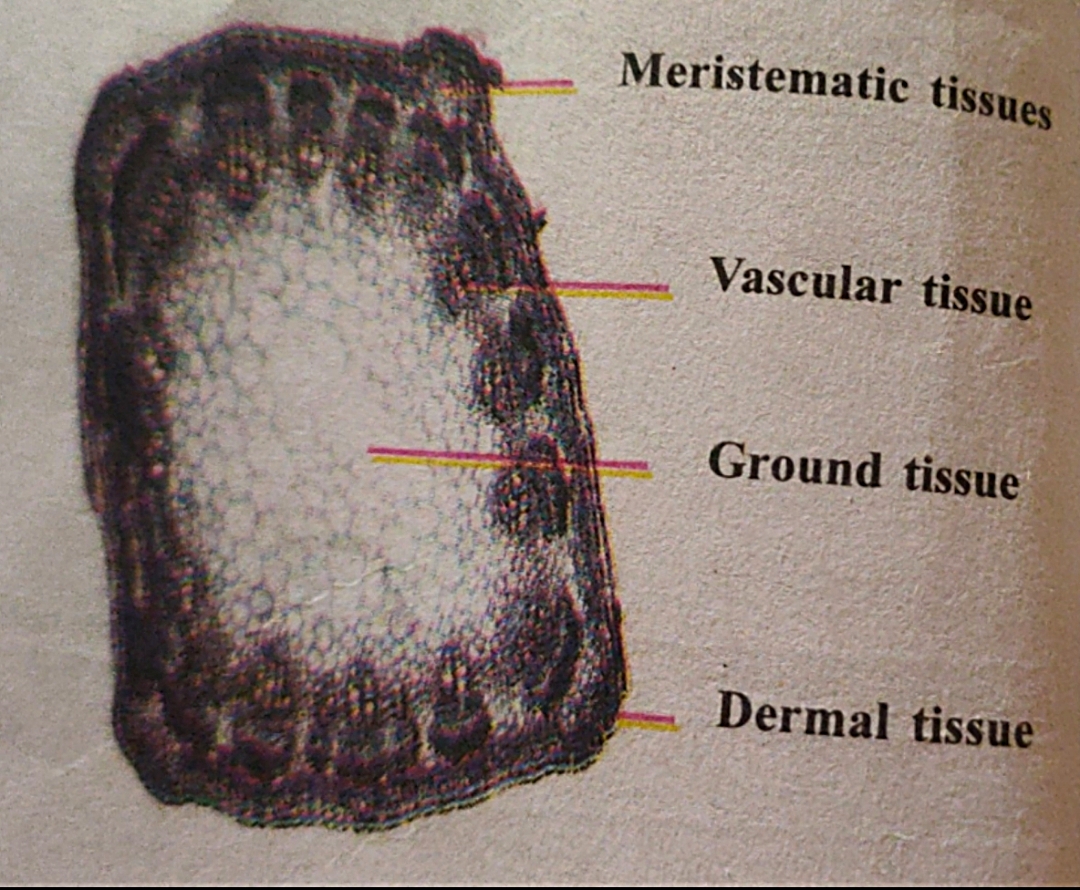 1. What is Meristematic tissue?

Tissues present around the edges in a lateral manner and giving rise to growth in the girth of the stem are called lateral meristematic tissues.

Areas from which branching takes place or a leaf or a flower stalk grows, we find a kind of meristematic tissue called intercalary meristematic( also called cambium) tissue.

Cells in the meristematic tissues are

2. What is Dermal tissue?

The dermal tissue over the entire surface of the plant body. Dermal tissue (dermis) usually consists of a single layer of tissues showing variations in the types of cells on the basis of their function and location. These tissues are divided into different types. They are the epidermis (outermost layer), mesoderm ( the middle layer), and endodermis (the innermost layer).

The walls of the cells of dermal tissue are comparatively thicker than the cells of meristematic tissues. In desert plants, it may be even more thick and waxy. Small pores are seen in the epidermis of the leaf, called stomata. They are enclosed by two kidney-shaped cells, called guard cells. Cells of the roots have long hair-like parts called root hairs.

The function of dermal tissue: the dermal tissue protects the plants from loss of water, mechanical damage like breaking and cleaning of branches, and invasion by parasitic and disease-causing organisms. In big trees, the dermal tissue forms several layers above the epidermis called bark.

Stomata and root hair are also dermal tissues that are essential for gaseous exchange, transpiration as well as absorption of water and minerals. Photosynthesis is also carried out by certain cells of this tissue.

3. What is Ground tissue?

In the sclerenchyma, the cells are thick-walled and tightly packed without spaces. So when compared with dermal tissue, the ground tissue is of various types. And some of the ground tissue helps in photosynthesis.

4. What is Vascular tissue?

The tissues involved in transportation are vascular tissues. They are composed of different types of cells which show specific arrangements.

The tissues that appear red are xylem tissue, and the cells adjacent to these are phloem tissues. Xylem is responsible for the transportation of materials like water and salts from the root. And phloem helps in the transportation of the food material prepared by photosynthesis to the other parts of the plants. Hence they are known as conducting or vascular tissues. Xylem and phloem together form vascular bundles. The vascular issues give mechanical support to the plant as well.

As a result of the preceding discussion, we can get the clarity that there are different types of plant tissue that are arranged in a specific manner to carry out different functions in the plant body.